A few days ago, I read about Robohash, a website for creating unique images (of robots) from any text. The author was thinking of using it for icons on a forum, but there are probably other use-cases for this. For example, as a variation of the color password hash to help users avoid typos in their passwords or, perhaps, as a visual representation of a user-submitted "secret code".
First, we need to create URLs of the form http://robohash.org/YOUR_TEXT, as instructed:
Next, we would like to support the different "image sets" that Robohash supports.
Using this, we can create image loaders for each set (currently three sets: "set1", "set2", and "set3"):
You can try it out and see that it works: 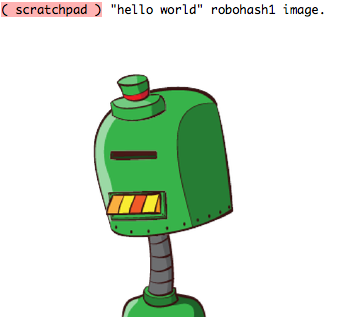 Robohash also supports custom backgrounds, changing image sizes, and varying image formats (e.g., JPG or BMP). Adding support for that is an exercise to the reader.

A Linear Time Majority Vote Algorithm was invented in 1980 by Bob Boyer and J Strother Moore (inventors of the popular Boyer-Moore string search algorithm). Not seeing this available in Factor, I thought to contribute one.


Note: this is also called the "Moore’s Voting Algorithm".

The algorithm simply looks at each element of the sequence:


Keep a candidate element and a counter (initially unknown and zero, respectively).

As we move across the sequence, look at each element:
When we are done, the candidate is the majority element, if there is a majority.
Using this specification, we can implement the algorithm:
A few simple tests show that this is working:
This is perhaps not quite idiomatic Factor, can you improve it?
Posted by mrjbq7 at 1:58 PM 6 comments:

Inspired by a blog post about "one-liners" in Clojure, I thought I'd demonstrate a few small pieces of Factor code doing some similar things:

Using the map word, we can apply a "doubling" quotation to each element.
We can easily calculate the sum of a sequence (here the numbers 1 through 1000):
We check if any of a list of words are within a string:
You can easily read the file-contents, or file-lines, with a specified encoding (e.g., UTF-8):
Sing the four verses to the "Happy Birthday" song:
Use filter (or even partition) with some selection criteria:
Use the http.client vocabulary to access a web service, and then the xml vocabulary to parse the result from a string. You could use the json.reader vocabulary to parse JSON responses.
Check the HTTP headers to find the version of a server used by a web server:
Use infimum and supremum to find the minimum and maximum, respectively, of a list (alternatively, you could use my maximum/minimum functions):
Parse a string into groups of two characters, then interpret those as hex values of characters, mapping the output as a string:
Use concurrency.combinators to perform certain tasks in parallel with futures:

About a month ago, Tom Moertel wrote a simple plagiarism detector in Haskell. I wanted to replicate his functionality using Factor, to contrast the two solutions.

The strategy in this plagiarism detector is fairly simple: calculate "long enough" n-grams that should be fairly unique and see if they are present in a particular piece of "suspect text", converting the common pieces into UPPERCASE so that we can visually see what might be plagiarized.
We can split text (using the grouping vocabulary) into consecutive groups of "n" words:
Given a piece of text suspected to be plagiarized and some sources to compare against, we can compute the common n-grams between the two pieces of text:
For each common n-gram found, we use a regular expression to find the matching part of the suspect text. The regular expression we will use, looks something like a space or start of line followed by our n-gram and ending with a space or end of line, allowing varying whitespace between words, being case insensitive, and ignoring non-letters within a word:
The sequences vocabulary contains a change-nth word to modify a particular element in a sequence. We can create a word to modify several elements easily:
Using change-nths and the "n-gram regexp", we can ch>upper each matching portion of text:
Using these building blocks, we can build a simple plagiarism detector:
A "main method" enables this program to run from the command line:
You can see it work by trying to find common 4-grams on some simple text (in this case, I added the word "really"):
It's fast enough for small examples, but not that fast for complete novels, particularly when run on texts with many common n-grams. One idea for improving the speed might be to examine the common-n-grams algorithm to return sequences of "n or more". This way, if the text contains a common 7-gram, and you are looking at common 4-grams, then it would have one entry instead of three.

The code for this is on my Github.
Posted by mrjbq7 at 9:56 AM No comments:

I've written about the conciseness of Factor before. Yesterday, I noticed a link to a functional programming tutorial called "Functional Thinking" that was posted two months ago.

The tutorial develops a program for classifying numbers based on the sum of its factors into perfect, abundant, or deficient numbers. The program goes through three improvements, ending up at this "best" solution in Java (using the Functional Java library):

While the proffered solution is much (much) better than the original "imperative" solution, I thought I would show what it could look like in Factor:
What do you think?
Posted by mrjbq7 at 8:57 PM 5 comments:

One year ago, I wrote about some new combinatoric functions that I wrote. I had a recent need for a couple of "substring" functions. Since I couldn't find them in Factor's standard library, I thought I would contribute these:

Our first word takes a sequence, and then returns all (consecutive) subsequences that can be found. In Factor, the grouping vocabulary provides a clumping feature that splits a sequence into overlapping, fixed-length, subsequences. We can use this to find clumps of every possible length to solve this problem:
You can see how this works:
Note: we specifically don't include the "empty" string in the results.

Several algorithms and implementations can be found for the longest common substring problem. Basically, we want a word that returns the longest (consecutive) substring that is common between two strings.

Below, you can see how it works:
Note: don't confuse this with the longest common subsequence problem (see substring vs. subsequence for more details), which is implemented in Factor by the lcs vocabulary.
Posted by mrjbq7 at 11:18 AM 4 comments:

The 99 Bottles Of Beer project has an entry for Factor. Unfortunately, it's for version 0.83 (latest released version is 0.94) and some minor changes have come into the language since then. Below, I contribute an updated version:

We can shorten this a bit by taking a few poetic liberties with the song. While doing that, we can make it flexible to allow any (positive) number of bottles:

This solution is similar to the one posted on the Rosetta Code project.

You might notice that a lot of the text is duplicative, so perhaps we can improve this solution by factoring out parts of the text into small and reusable functions.

It's a bit longer than the original and, in several ways, not as easy to understand. If we wanted to reuse this functionality elsewhere, it's a clear win. But, if we want to simply generate the "bottles song", perhaps the first or second way is better.

For fun, I thought we could use our computer to sing to us (if you're using Mac OS X):

The code for this is on my Github.

Today is Independence Day in the United States. Several lists of fantastic facts are being shared, including that today is the "biggest beer-selling holiday of the year". However, while not as fantastic, here are a few fun facts about today that can be derived using Factor.

Using the calendar vocabulary, we can create a timestamp object for today's date:

We can see that today is the 185th day of the year:

Today is also the 27th week of the year (using weeks starting on Sunday - there might be a different answer using week-of-year-monday:

This year, July 4th falls on a Monday, but its a different day of the week each year. We can see which days of the week Independence Day falls on over the last few years: