As a diversion today, I added "color tab completion" to the Factor environment. I even made the color names render with their assigned color value: 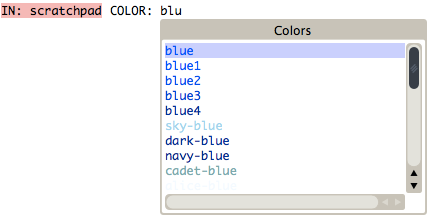 For the curious, I extended the tools.completion vocabulary to implement a "colors-matching" word and then added a "colors-completion" type to the UI.

We've known for awhile that the Factor user interface is a little bit slow when displaying tables with many rows. I wasn't sure this was a big problem until a detailed bug report was filed (thanks @k7f!) that pointed out the opengl.gl vocabulary (with over 2,000 symbols in it) was "virtually unscrollable".

After poking around at the profiler output, I noticed that some UI gadgets had "baseline alignment" support which was used in the layout process. Some of these calculations were quite expensive and could easily be cached.

After a few changes, and introducing the concept of an "aligned gadget" which provides a mechanism to cache these alignment calculations, the original test case is almost 10 times as responsive as before!

This is available in the master branch on Github.

Function "annotations" are a feature that many languages support. They may take various forms such as decorators in Python or class and method annotations in Java -- having direct (like Python) or no direct (like Java) effect on the code it annotates. Factor has some similar features that I'll demonstrate below.

We can define a simple word to use in this example (that adds 2 to its input):

Using the tools.annotations vocabulary, we can attach a "watch" annotation that prints the inputs and outputs of a word when it is called:

If you print the word definition, you can see how it was modified:

You can call this word (either directly, or indirectly by calling another word which calls it) and see its inputs and outputs. A nice feature of this is that the UI lets you click on these values and see more detail (particularly useful if they are tuples or more complex objects):

You can stop watching a word by calling "reset" on it (or right-clicking on its definition in the UI and choosing "reset") to remove all of its annotations. Currently, a word can only be annotated once.

In addition to "watching", you can also use annotations to track the total running time of a word:

It also supports arbitrary annotations, such as adding "before" and "after" logic:

These annotations can be pretty powerful and were even used to build our code coverage tool.