The Gopher protocol is relatively dated now, but when it was first released in 1991, it had a number of modern features that we would later enjoy in the World Wide Web. In particular, in RFC 1436, it lists these features:

We're going to build a simple word to let us look through Gopherspace using Factor.

Using the URLs vocabulary, we will build a tool to fetch documents from a Gopher server using a URL that looks like this:

This specifies a host, an optional port (defaulting to 70 if not specified), and a path which includes an item type and a selector identifying the document to obtain.

Once a network connection is opened, we can retrieve the specified document by sending the selector followed by a CRLF (carriage return and line feed, ASCII bytes 13 and 10 respectively), and then reading the response:

The item type, which we are ignoring in the code above, can be used a bit like a filename extension to handle documents of different types in particular ways. Some common types that you might see:

Right now, our code assumes that all the documents we will fetch are ASCII, and it doesn't have any special handling for menus, or support for a query string that would allow using Gopher "search servers". I added some basic support for those items in the new gopher vocabulary that I committed yesterday. In addition, I built a simple Gopher browser complete with history support and ability to view GIF images in the gopher.ui vocabulary.

Here's how you would use it:

That will pop up a window that looks like this, with clickable links and everything: 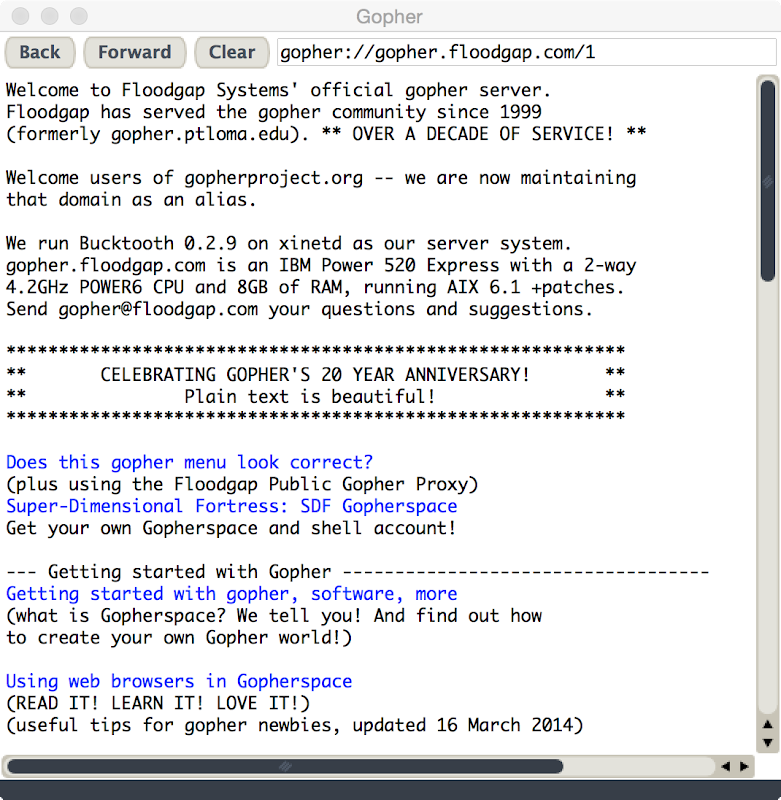 It's neat using some of these early protocols, both because they tend to be simpler, but especially when you see that they have a passionate following. As of December 2014, Veronica-2 has indexed 150 gopher servers with over 3 million unique selectors. You can see current stats by going to: